Food and garden waste make up almost 40% of our trash bin. It is important to compost food waste and not to let it create unnecessary problems at the landfill, and return it as fertilizers to nature, which will give us new food.

Financial aspect. By composting food waste, you reduce your waste by almost 40%. So, you throw out your garbage less often and pay less for its disposal.

Hygienic aspect. Food waste does not linger in the bin for long and, therefore, being composted it does not create discomfort for the occupants of the apartment. This is especially relevant for the summertime when there is a large number of fruits and vegetables – they cause odor and also provoke the appearance of small flies (drosophila).

Socio-aesthetic aspect. The compost generated from proper disposal of food waste is a great fertilizer for plants growing on the territory of the condominium. Composting makes a significant contribution to the landscaping of your home area, as the plants are healthy, the bushes and trees are dense, so they will better clean the air and create enough shade during hot days, and will help to create a nice space to rest for the residents. Ready-made compost can also be used for flower pots in an apartment.

Climate aspect. Organic waste that lands on landfills, unlike those that return as compost to nature, is hazardous waste. Interacting with other types of MSW (mixed solid waste) and not having access to air, they emit methane, a gas that accelerates climate change, as it is one of the greenhouse gases, and creates a risk of burns on the landfill.

There are two popular ways of composting: using a bokashi container or using vermicomposting. In general, organic waste in the bokashi container is not composted but only fermented because no compost is produced during such processing. This is, in its essence, a way of collecting more organic waste without decay and spoilage. Then this waste should either be sent to a vermicomposter to obtain fertilizer or be taken out and dug somewhere in the forest to be decomposed (composted) in the natural environment. If you choose the last option, do not dig deep into the ground.

For more information on bokashi containers and how to deal with them, see “Collection of organic waste in the apartment”.

Now we will talk about composting in designated composters. It is made by composting worms and is called vermicomposting. The two most popular types are staratel’ (“prospector”) and “Californian”. Worms work over organic waste for compost.

Compost is a fertilizer that looks like black soil. It is a useful supplement when planting flowers, shrubs and trees (both ornamental and edible).

Vermicomposters can be both indoor for an apartment and large ones for outdoor. For more information on outdoor composting, see this page.

An indoor vermicomposter can be purchased in a ready-made form, but you can use convenient methods: an ordinary box and polypropylene cereals bag. 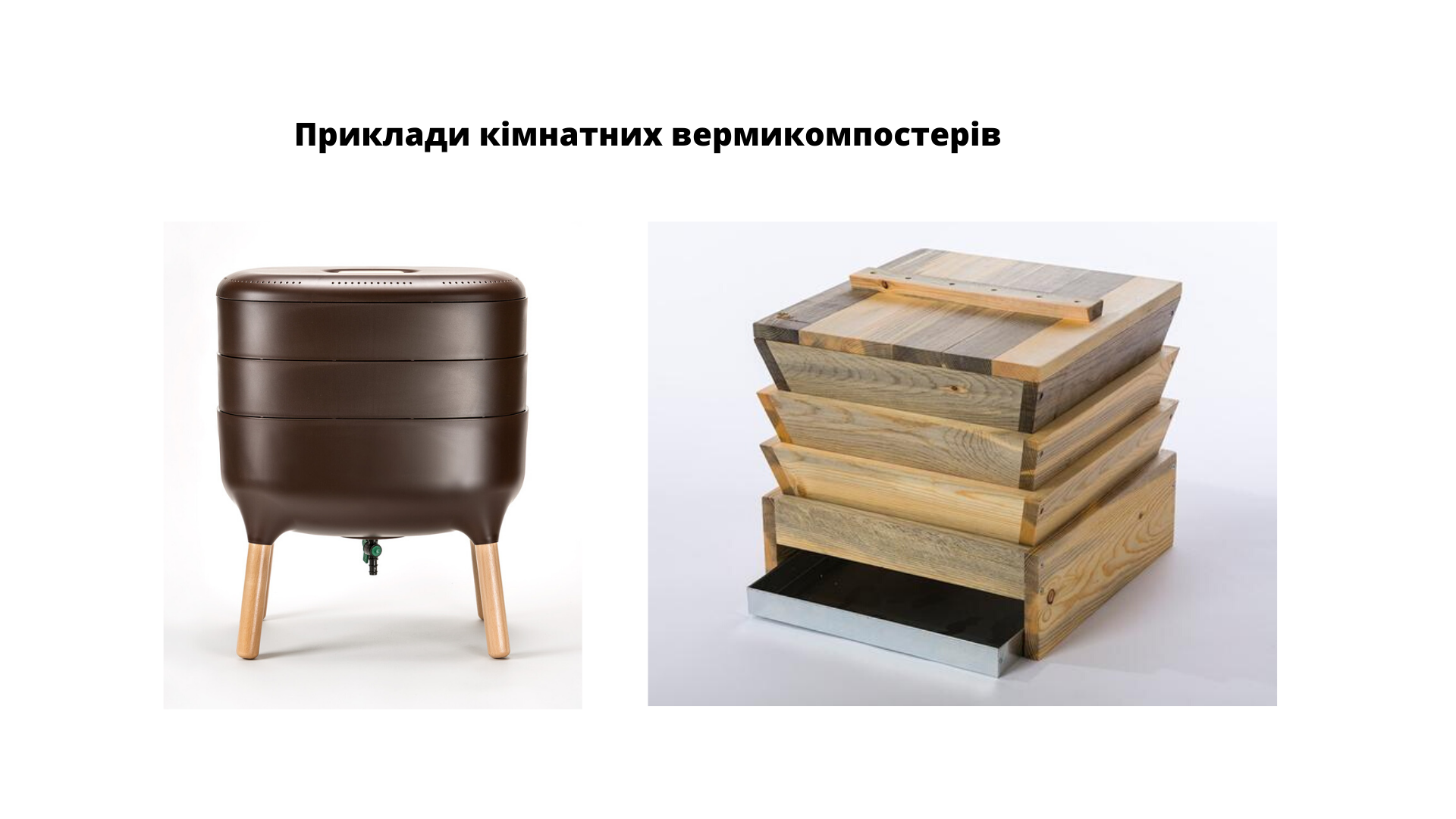 What can and cannot be composted

And most important: what you can and what should not be thrown into the vermicomposter. First, take a look at the visualization with a clear list. You can save the image itself or there are special booklets and posters in the download materials that can be saved and hung near the organic waste collection point. 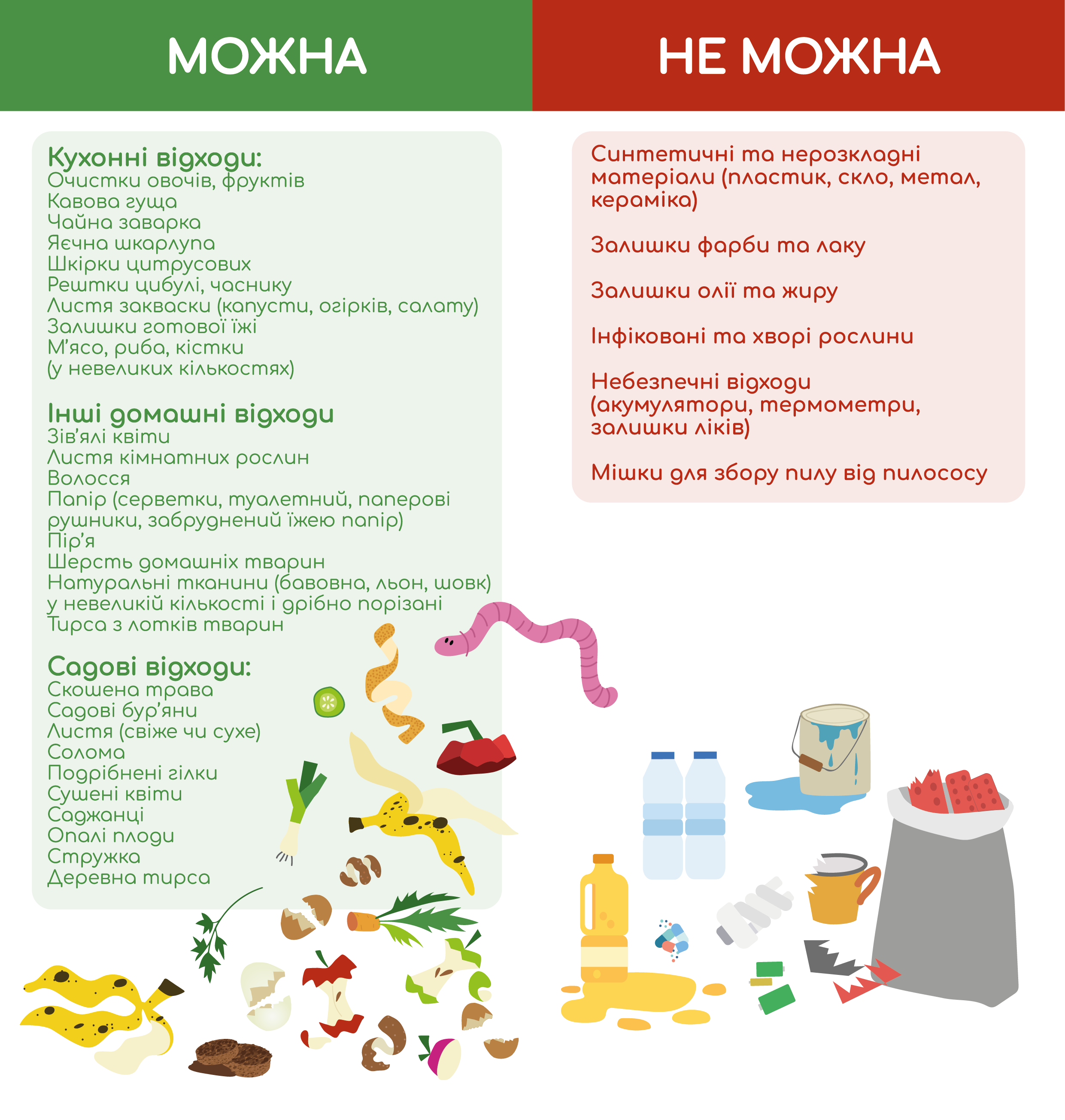 Remember that organic waste can be wetter and drier. It is desirable that the amount of moisture does not prevail, as the “wet” waste molds and has an unpleasant odor.

Meat, fish, and bones can be composted, but they should not be thrown in large quantities as it affects the smell.

The section “Outdoor composting” contains a list of problems, that may occur, their causes and solutions.